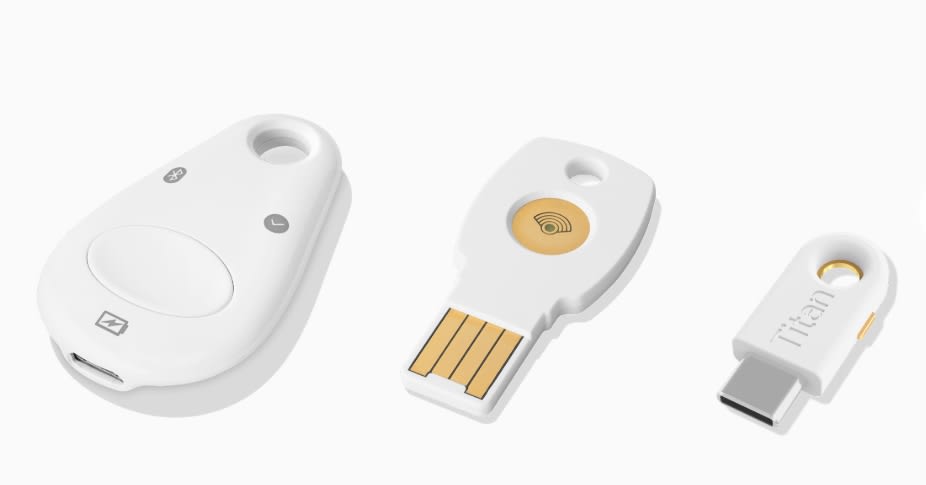 Whether you use Android or iOS, a hardware security key can provide even more protection against password theft or phishing. It’s even more secure than other forms of multifactor authentication, because the site you’re logging into has to verify itself to the security key too, which can help protect you against increasingly-tricky phishing attacks.

Now, on the same day that Apple increased support for security keys on iOS 13.3, Google has kicked off a sale on its Titan security keys that makes them cheaper than we’ve ever seen before. Using the code “B-TITAN35OFF” can take up to $35 off of a purchase of security keys, so you can snag the wireless-equipped key that connects over USB, Bluetooth or NFC for just $3.99 (the price of shipping), instead of $35, or a pair of keys that adds a USB unit, at just under $20 instead of $50 plus shipping.

It even appears that the code will work on multiple orders, so you could order them separately and use the discount on each one. Looking for the USB-C key that Google teamed with Yubico on? Apply the coupon code and it can be yours for a total of $9.29.

Last year, Google reported that making security keys mandatory among its employees cut the number of successful phishing attacks to zero. With that in mind, if you’re concerned about security and are willing to live with a little extra hassle in keeping track of the hardware, then this is an option you should take advantage of. With two keys, you can enable Google’s Advanced Protection that’s recommended for those at risk of targeted attacks.

For many people, relying on two-factor authentication via a code generating app or prompt sent to your mobile device is good enough, but this is just another layer of security for your accounts with Google, Facebook, Twitter, Microsoft, 1Password, Dropbox, GitHub and more.

Update (12/11 2:28 AM): The individual keys are now all showing out of stock, although if more become available the code should work for the rest of this month. The bundle of one wireless-equipped key and one NFC/USB-A key is still available (you may have to scroll to the right to see it), and with the discount it costs less than $20 — not as great of a discount as the individual ones but still cheaper than the usual price of $50 plus shipping.