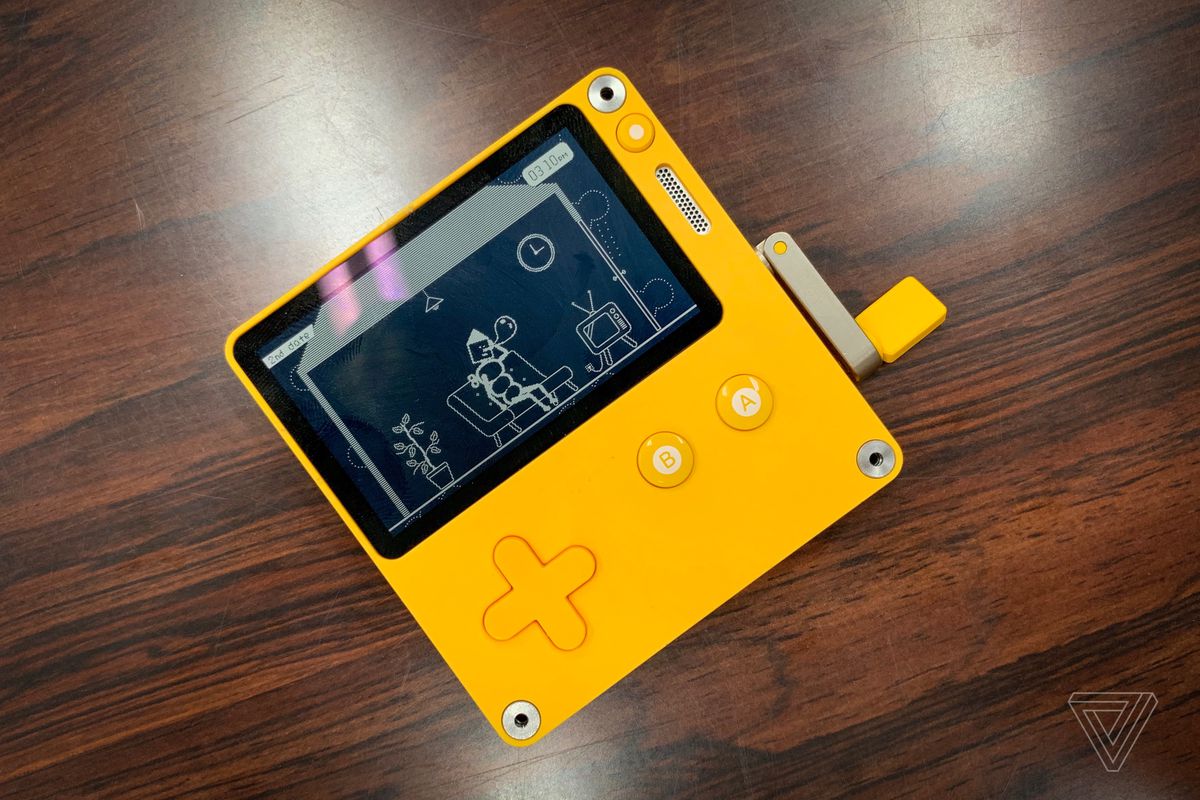 Panic, the venerable Mac and iOS software firm, made a major splash the other week with the announcement of its first hardware device. The Playdate is a bright yellow handheld gaming console with a monochrome screen; it was co-designed by Swedish hardware wizards Teenage Engineering and features exclusive releases from renowned developers like Zach Gage, Bennett Foddy, and Keita Takahashi.

I just met with Takahashi at BitSummit, the ever-growing annual indie game festival in Kyoto, and got the chance to play his game Crankin’s Time Travel Adventure on his own Playdate unit. The hardware isn’t finished from a technical perspective — Takahashi’s model is marked “evaluation only” on the back and needed multiple hard resets during our meeting. But from a design perspective, it’s as delightful as I’d hoped.

The Playdate’s screen sounds old-school, but it looks great in person. It’s a truly 1-bit black-and-white display with no backlighting whatsoever, which gives it a deliberate, minimalist feel. The closest comparison I can make is to the original Pebble smartwatch, which also used a similar Memory LCD panel from Sharp, but it’s much bigger at 2.7 inches diagonal and is all the better for the lack of cheap-feeling backlight. There really isn’t much on the market that looks like this, and I think people will understand the decision to go monochrome once they see it for themselves.

The overall construction of the Playdate is reassuringly chunky and solid, with a clicky D-pad and two responsive face buttons. The yellow plastic is nicely textured and, well, it’s a great yellow. The speaker is surprisingly loud and clear.

But the design element that has gotten everyone talking is the crank on the right of the Playdate, which Takahashi’s game is solely controlled by. There’s just the right amount of resistance on the crank, and the device is so light that it should be easy to use it at the same time as the D-pad if any developers decide to go that route.

Crankin’s Time Travel Adventure itself is hilarious, from the chunk I got to play. You move your player character through a 2D plane and time itself by winding the crank to advance the clock; arrive late for a date and your rightly pissed-off girlfriend will suplex you into the ground. It’s as offbeat as you’d expect from the creator of Katamari Damacy, Noby Noby Boy, and the upcoming Wattam, which is also being shown off at BitSummit and looks to be even more charmingly unhinged.

The Playdate isn’t set to ship until next year, and frankly that date can’t come soon enough. I love the idea of a tiny, hyper-portable machine that can be easily played outside and comes with original games designed specifically for its unique hardware, and my quick encounter with the work in progress has only convinced me further.