Soon after Samsung announced the Galaxy M10 and Galaxy M20 in India, there is a third M-series device in the pipeline. A new leak from PriceKart.com shows a Galaxy M30 on a schematic diagram akin to one that you’d see in a user manual.

Like the other two Galaxy M phones, the M30 will have a gradient finish in both black and blue. There’s a fingerprint scanner on the back like the M20, but the clearest difference between the M20 and the M30 is one additional camera. This triple camera is said to be made up of a 13MP camera, and two other 5MP sensors, with presumably a wide and a telephoto lens each. 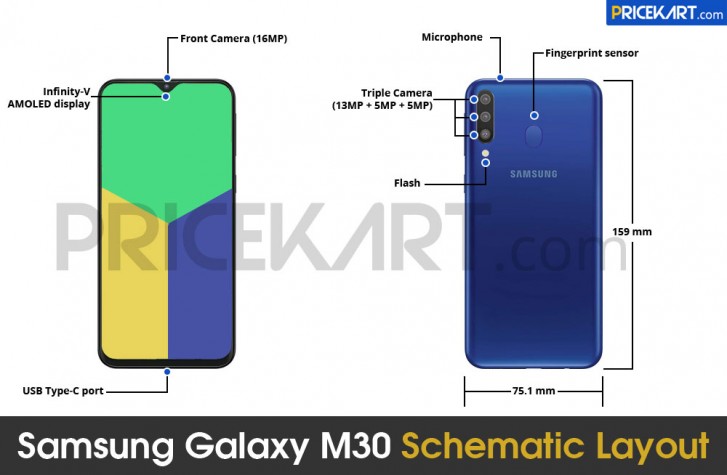 The diagram shows dimensions slightly longer and wider than the M20’s. The phone is 159mm long by 75.1mm wide. At the bottom of the phone is a USB-C port. Interestingly, the diagram does not point to any 3.5mm headphone jack.

Rumored specs appear to be in line with the M20: There’s a 6.38-inch Infinity-V AMOLED screen with FHD+ resolution, and powered by an Exynos 7904 CPU. In terms of memory, the report claims we could see up to 128GB of internal storage and 6GB of RAM. Those chances are quite slim, however, considering these are entry-level devices.

There has been no official mention of a Galaxy M30, so we do remain skeptical. We did report that the M30 would have the same 5,000 mAh battery as the M20 so there could be a correlation. If such a device does exist, we have yet to know when we may expect it to hit markets.