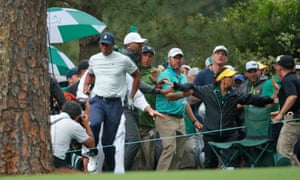 Tiger Woods shrugged off a nasty collision with a security guard during his second round at the Masters. “Accidents happen,” Woods said. “We move on. I’m good.” For a moment it looked as though the blow might have caused him a serious injury to his ankle but after the round Woods insisted he was fine.

“Apart from having four knee surgeries and three back surgeries, I’m great,” he joked. Woods shot 68, which left him six-under and one off the lead. “It was fun. I felt like I left a few shots out there but overall it was a solid day, I hung in there and just kept grinding and tried to make a birdie here and there where I could.”

The accident happened on the 14th, Woods hit his tee shot left into the crowd, who gathered close around to watch him play second. After he had hit it they surged in behind him and a jittery security guard came hurtling across to make sure they did not come too close.

He was in such a hurry that he broke one of Augusta National’s cardinal rules: no running because, as the spectators’ handbook puts it, “for the safety of everyone, running is considered unacceptable behaviour”. He slipped and his knee collided with Woods’ right shin as he fell.

The guard caught him side-on and his ankle, or knee, could easily have given way. But he was OK. He skipped three times, shook it off and strolled on towards the green, where he made a 28-foot putt for birdie. It was an eventful back nine. Woods also endured a 30-minute break for bad weather after he had hit a brilliant tee shot on the 12th.

He missed the putt when play resumed but picked up two more birdies coming in. “The last two majors I’ve been right there,” he said. And now he is again. As for the security guard, it is not clear what happened to him but it would not be surprising if he turns up in the far parking lot on Saturday directing the traffic.