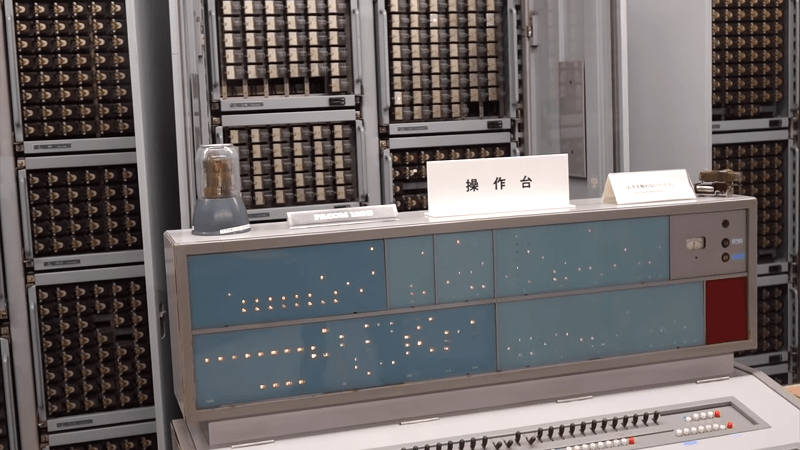 If you study the history of computing you might have heard of the FACOM 128B, a Japanese relay computer from 1958. It holds the distinction of being a contender for the oldest computer that still works in its original form, as it resides in a Fujitsu building in Numazu Japan. [CuriousMarc] visited the old computer and created a video about it as well as painting a picture of other contemporary machines. You can see the video below.

[Marc] explains how a relay machine was already behind the times in 1958, and also shows how the 5,000 relay machine is laid out. The machine on display came from a Tokyo university and did the kind of computations you might use a computer for today to do engineering design.

Watching — and hearing — the beast run a program to add three and three is very illustrative. The keyboards reminded us of old adding machines. The machine uses floating point or bi-quinary that stores each digit as 7 bits. This led to a wide word width but made it simple to see when a relay got stuck since each number had two parts and only one relay was on in each part for any number.

The video isn’t just a home movie of the visit but shows how the operator entered data and instructions along with how to read the output display. The machine had 180 words of memory that took several cabinets. That works out to about 13K of memory. That was still enough to set up the solution for a 5×5 matrix inversion. We were amused to see that a program loop was literally a loop of punched tape.

We like flying a jet plane but are nostalgic for airships. By the same token, we kind of wish our desktop computer used relays like this. We’d probably be pretty unhappy if either of those were really true. Then again, we have seen a single board relay computer recently.

We’ve actually seen this computer in an earlier post. There we noted the computer was asynchronous, something that would be unusual in a modern CPU.